A while back the Wi-Fi Alliance announced a new certification program, Wi-Fi Direct, which enables a PC to connect directly with other Wi-Fi devices without having to go through an Access Point.

The Wi-Fi certification process for Wi-Fi Direct is scheduled to be launched by the end of 2010, but there are already two pre-standard implementations of this concept, My Wi-Fi, an Intel product which ships in Centrino 2 systems, and Wireless Hosted Network which ships in all versions of Windows 7.

The Wi-Fi Direct driver makes a single Wi-Fi adapter on the PC look like two to the operating system: one ordinary one that associates with a regular Access Point, and a second acting as a “Virtual Access Point.” The virtual access point (Microsoft calls it a “SoftAP”) actually runs inside the Wi-Fi driver on the PC (labeled WPAN I/F in the Intel diagram below). 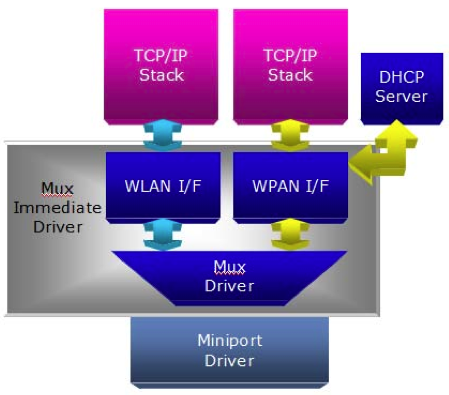 To the outside world the Wi-Fi adapter also looks like two devices, each with its own MAC address: one the PC just like without Wi-Fi Direct, and the other an access point. Devices that associate with that access point join the PC’s PAN (Personal Area Network).

This yields several benefits in various use cases.

I wrote a couple of years ago about how a company called Ozmo planned to use a Wi-Fi PAN to connect peripherals to PCs, replacing Bluetooth and proprietary wireless technologies. That plan has now come to fruition. Earlier this month Ozmo announced that it had received $10.8 million in additional funding, and this week it announced two major customers: Primax, a leading ODM of wireless mice, and NMB Technologies, a leading ODM of wireless keyboards.

Here’s a slide from one of their promotional presentations giving a comparison with Bluetooth and proprietary technologies: 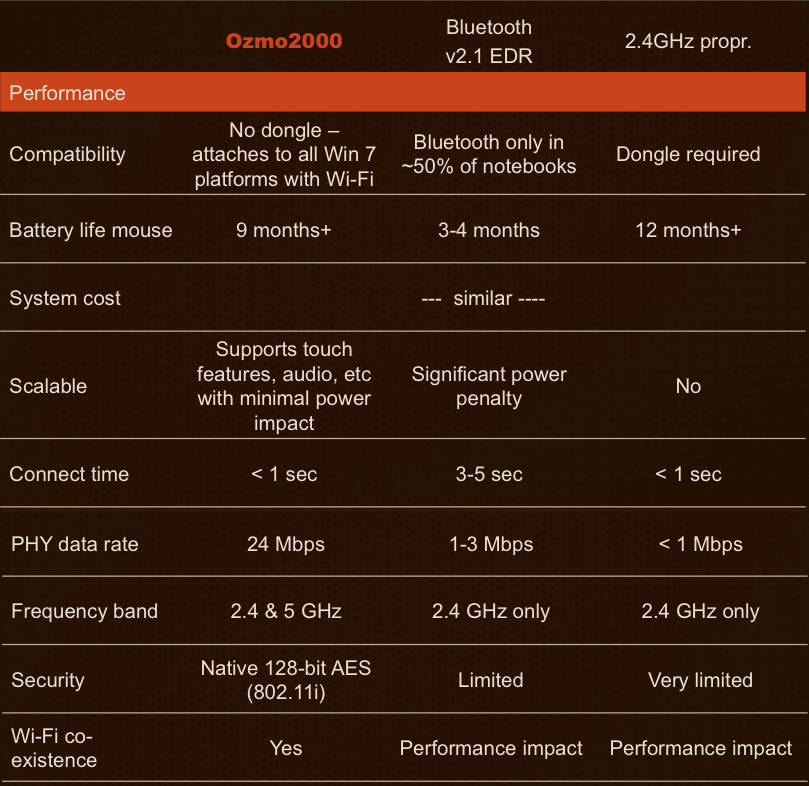 The essence of Ozmo’s approach is low cost, multi-device, low bandwidth and low power consumption. Wi-Fi Direct has another use case that is high bandwidth, with no requirement for low power.

If you want to stream video from your PC to a monitor using traditional Wi-Fi (“infrastructure mode”) each packet goes from the PC to the access point, then from the access point to the TV, so it occupies the spectrum twice for each packet. Wi-Fi Direct effectively doubles the available throughput, since each packet flies through the ether only once, directly from the PC to the TV. But it actually does better than that. Supposing the PC and the TV are in the same room, but the access point is in a different room, the PC can transmit at much lower power. Another similar Wi-Fi Direct session can then happen in another room in the house. Without Wi-Fi direct the two sessions would have to share the access point, taking turns to use the spectrum. So we get increased aggregate throughput both from halving the number of packet transmissions, and from allowing simultaneous use of the spectrum by multiple sessions (if they are far enough apart).

A Wi-Fi buff would point out that you can already do all this with ad-hoc mode, but Wi-Fi Direct purports to be usable by mortals, and to work interoperably, neither of which could be said for ad-hoc mode until recently. In January Infinitec announced a new point-to-point video streaming product that claims to be easy to use and universally interoperable, that Engadget implies uses ad-hoc mode, though Google can’t find the words “ad hoc” on the Infinitec website.

Between the bandwidth extremes of mice and TVs, lie numerous other potential uses, like headsets (which Ozmo also supports); syncing phones, cameras and media players; and wireless printers.

ABI came out with a press release last week saying that 770 million Wi-Fi chips will ship in 2010. This is an amazing number. Where are they all going? Fortunately ABI included a bar-chart with this information in the press release. Here it is (click on it for a full-size view):

The y axis isn’t labeled, but the divisions appear to be roughly 200 million units.

This year shows roughly equal shipments going to phones, mobile PCs, and everything else. There is no category of Access Points, so presumably less of those are sold than “pure VoWi-Fi handsets.” I find this surprising, since I expect the category of pure VoWi-Fi handsets to remain moribund. Gigaset, which makes an excellent cordless handset for VoIP, stopped using Wi-Fi and went over to DECT because of its superior characteristics for this application.

There is also no listing for tablet PCs, a category set to boom; they must be subsumed under MIDs (Mobile Internet Devices).

The chart shows the portable music player category growing vigorously through 2015. iPod unit sales were down 8% year on year in 1Q10, and pretty much stagnant since 2007. ABI must be thinking that even with unit sales dropping, the attach rate of Wi-Fi will soar.

The category of “Computer Peripherals” will probably grow faster than ABI seems to anticipate. Wireless keyboards and mice use either Bluetooth or proprietary radios currently, but the new Wi-Fi alliance specification “Wi-Fi Direct” will change that. Ozmo is aiming to use Wi-Fi to improve battery life in mice and keyboards two to three-fold. Since all laptops, most all-in-one PCs and many regular desktops already have Wi-Fi built-in (that’s at least double the Bluetooth attach rate) this may be an attractive proposition for the makers (and purchasers) of wireless mice and keyboards. Booming sales of tablet PCs may further boost sales of wireless keyboards and mice.