Reuters ran a story today from the FMC World Congress in Amsterdam.
The article cites very weak consumer uptake leading to the cancellation of T-Mobile’s T-One service in Germany, and weak uptake also at Neuf Cegetel. It seems strangely unbalanced, since it doesn’t mention T-Mobile’s imminent national rollout of FMC in the USA, the BT/Vodafone Fusion service and the FT/Orange Unik service. There are several other UMA deployments that would have made the outlook seem less gloomy.
The T-Mobile service was survived in Germany by T-Com’s similar service, Telekom-Vorteil, a “fixed/Wi-Fi” service that routes wireline calls over Wi-Fi, so you can use a Wi-Fi phone or the Wi-Fi of your dual mode phone to pick up calls on your home number when you are at home. This is not UMA based, and drops the call when you move out of Wi-Fi range. People like it.

Parvesh Sethi is Cisco’s Vice President, Advanced Services. In his keynote at the Communications Developer Conference this week in Santa Clara, he described an interesting use case for future wireless devices:

Your phone automatically notifies the hotel when you arrive – no need to stand in line to check in. Your assigned room number appears on your phone screen. The phone acts as a wireless key for your room. In your room the hotel puts targeted ads onto your phone’s screen.

The bulk of his talk consisted of advice for developers. The two main themes were “leverage the power of the network” and “exploit the long tail.”

The power of the network bit is to be expected from Cisco. The long tail part was a theme at many of the other presentations in the conference. For those who haven’t read the book, the idea is that the enormous reach of the web at relatively minuscule cost allows products that in the past would have been too narrow in appeal now to be commercially viable, and when combined with enough other low-volume products, to be lucrative. For example, a book that sells two copies a month isn’t worth carrying in a retail bookshop. But an online bookstore with a hundred thousand such titles would glean annual revenues in the tens of millions of dollars.

Sethi explained that custom programming for a particular enterprise used to be prohibitively expensive. But now the Web is packed with useful components that you can invoke through simple APIs. Web development environments automatically take care of the hard stuff for you, stuff like security, transcoding, QoS, authentication. Application acceleration is available right in the network. The open application development environment makes it possible for people to add their own value. This unleashes the long tail effect for the component vendors.

The example Sethi gave for this type of application was a real-world one, from an individual Subway franchisee – not Subway Corporate. The application runs on a Cisco phone. When an employee arrives in the morning, he logs in on the phone. This means no need for a time clock. Suppose four employees are scheduled to work a shift, but only three clock in. Previously one would have to start calling to find a substitute, leaving only two to perform the work. Now the phone system starts outdialing automatically, calling down the list of substitutes until one responds with a touchtone. Meanwhile, back in the store, the phone reminds the employees about essential process steps, like putting the bread in the oven. If the employee doesn’t acknowledge that he has done it, the system calls the supervisor to snitch. Sethi claimed that this application yielded a 30% increase in lunchtime revenue in its first month of operation.

Openness of the development environment, the ability for users to modify Cisco’s system and incorporate it into applications built on a whole set of such open components was one of four “Pillars of UC development” that Sethi identified. The other three were security, simplicity and virtuality (access to the application via any device, any where).

I wrote last month about a WSJ article panning the Flipstart UMPC.

Today Mossberg is a lot kinder; writing about the Samsung Q1 Ultra, he says it takes over four minutes to reboot it, the battery lasts about 3 hours, and it costs too much at $800. But his conclusion is: “if you don’t do a lot of document creation, and value small size and weight enough to put up with some hassles, the UMPC is finally an acceptable choice.”

This has to be a huge relief to Paul Otellini. Intel is banking on the UMPC becoming a mainstream device.

I am at the VoIP Developer Conference in Santa Clara today and tomorrow. Paul Amery, the man behind Skype’s developer outreach program gave a relaxed and engaging talk on Wednesday morning. He gave some numbers and some advice to developers.

First, the numbers: there are now almost 200 million registered users of Skype. 30% of Skype users use it for business calls. In December 2006 Skype 3.0 started putting add-in programs right in the menu of the on-screen phone rather than leaving them in a “back end gallery” on the website. Downloads of “Skype Extras” went from 25 thousand a month to 3 million a month as a result of this change. The most popular download is Crazy Talk, a lip syncing avatar that you can use in video calls even if you don’t have a camera. It has been downloaded 4.5 million times since December. Gizmos Talking Heads is another top ten avatar. 30% of the downloads are games. When Skype sells one of your Extras you get 60% of the revenue.

Another number from Paul was that there are tens of thousands of third party developers building Extras. Clearly to succeed you have to stand out from the pack. Paul had a simple recipe for this: keep your software simple. What sells is what users can figure out in less than 10 seconds. This is so true; look at the revenues being made from ringtones. 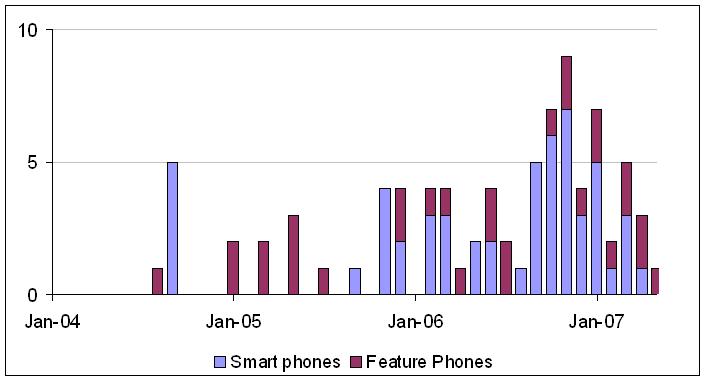 Today’s Wall Street Journal has a good article about T-Mobile’s UMA trial in Seattle. It says that T-Mobile may be rolling it out nationally as early as next month, despite some trial particpants’ complaints about handoff and battery life issues. T-Mobile will be offering a home router to help with QoS and battery life. I presume that for the battery life this is just WMM Power Save (802.11e APSD) since that is what the phones in the trial (Samsung T709 and Nokia 6136) support. For QoS side I expect these APs will support WMM (802.11e EDCF), but they could also support some proprietary QoS on the WAN access link, the way that the AT&T CallVantage routers do, which would be interesting.

There is some background on the trial here.

The article goes on to put the trial into the context of other FMC deployments, from BT Fusion, Telecom Italia and Orange. The article quotes a Verizon Wireless spokesman saying that they aren’t convinced that Wi-Fi can deliver high enough voice quality to carry Verizon branded calls. This is amusing bearing in mind the usual quality of a cellular call in a residence.

The article also quotes Frank Hanzlik, the head of the Wi-Fi Alliance as saying that business FMC may have more potential than consumer. I agree.