The term “QoS” is used ambiguously. The two main categories of definition are first, QoS Provisioning: “the capability of a network to provide better service to selected network traffic,” which means packet prioritization of one kind or another, and second more literally: “Quality of Service,” which is the degree of perfection of a user’s audio experience in the face of potential impairments to network performance. These impairments fall into four categories: availability, packet loss, packet delay and tampering. Since this sense is normally used in the context of trying to measure it, we could call it QoS Metrics as opposed to QoS Provisioning. I would put issues like choice of codec and echo into the larger category of Quality of Experience, which includes all the possible impairments to audio experience, not just those imposed by the network.

By “tampering” I mean any intentional changes to the media payload of a packet, and I am OK with the negative connotations of the term since I favor the “dumb pipes” view of the Internet. On phone calls the vast bulk of such tampering is transcoding: changing the media format from one codec to another. Transcoding always reduces the fidelity of the sound, even when transcoding to a “better” codec.

Networks vary greatly in the QoS they deliver. One of the major benefits of going with VoIP service provided by your ISP (Internet Service Provider) is that your ISP has complete control over QoS. But there is a growing number of ITSPs (Internet Telephony Service Providers) that contend that the open Internet provides adequate QoS for business-grade telephone service. Skype, for example.

But it’s nice to be sure. So I have added a “QoS Metrics” category in the list to the right of this post. You can use the tools there to check your connection. I particularly like the one from Voxygen, which frames the test results in terms of the number of simultaneous voice sessions that your WAN connection can comfortably handle. Here’s an example of a test of ten channels: 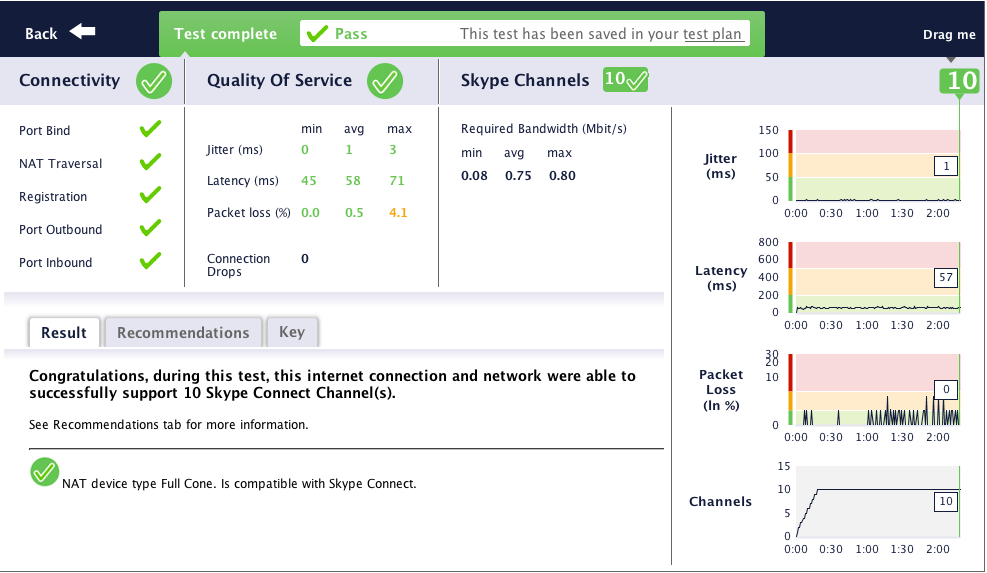 Aerohive claims to be the first example of a third-generation Wireless LAN architecture.

The move from the first generation to the second was driven by enterprise networking needs. Enterprises need greater control and manageability than smaller deployments. First generation autonomous access points didn’t have the processing power to handle the demands of greater network control, so a separate category of device was a natural solution: in the second generation architecture, “thin” access points did all the real-time work, and delegated the less time-sensitive processing to powerful central controllers.

Now the technology transition to 802.11n enables higher capacity wireless networks with better coverage. This allows enterprises to expand the role of wireless in their networks, from convenience to an alternative access layer. This in turn further increases the capacity, performance and reliability demands on the WLAN.

Aerohive believes this generational change in technology and market requires a corresponding generational change in system architecture. A fundamental technology driver for 802.11n, the ever-increasing processing bang-for-the-buck yielded by Moore’s law, also yields sufficient low-cost processing power to move the control functions from central controllers back to the access points. Aerohive aspires to lead the enterprise Wi-Fi market into this new architecture generation.

Superficially, getting rid of the controller looks like a return to the first generation architecture. But an architecture with all the benefits of a controller-based WLAN, only without a controller, requires a sophisticated suite of protocols by which the smart access points can coordinate with each other. Aerohive claims to have developed such a protocol suite.

The original controller-based architectures used the controller for all network traffic: the management plane, the control plane and the data plane. The bulk of network traffic is on the data plane, so bottlenecks there do more damage than on the other planes. So modern controller-based architectures have “hybrid” access points that handle the data plane, leaving only the control and management planes to the controller device (Aerohive’s architect, Devin Akin, says:, “distributed data forwarding at Layer-2 isn’t news, as every other vendor can do this.”) Aerohive’s third generation architecture takes it to the next step and distributes control plane handling as well, leaving only the management function centralized, and that’s just software on a generic server.

Aerohive contends that controller-based architectures are expensive, poorly scalable, unreliable, hard to deploy and not needed. A controller-based architecture is more expensive than a controller-less one, because controllers aren’t free (Aerohive charges the same for its APs as other vendors do for their thin ones: under $700 for a 2×2 MIMO dual-band 802.11n device). It is not scalable because the controller constitutes a bottleneck. It is not reliable because a controller is a single point of failure, and it is not needed because processing power is now so cheap that all the functions of the controller can be put into each AP, and given the right system design, the APs can coordinate with each other without the need for centralized control.

Distributing control in this way is considerably more difficult than distributing data forwarding. Control plane functions include all the security features of the WLAN, like authentication and admission, multiple VLANs and intrusion detection (WIPS). Greg Taylor, wireless LAN services practice lead for the Professional Services Organization of BT in North America says “The number one benefit [of a controller-based architecture] is security,” so a controller-less solution has to reassure customers that their vulnerability will not be increased. According to Dr. Amit Sinha, Chief Technology Officer at Motorola Enterprise Networking and Communications, other functions handled by controllers include “firewall, QoS, L2/L3 roaming, WIPS, AAA, site survivability, DHCP, dynamic RF management, firmware and configuration management, load balancing, statistics aggregation, etc.”

Here’s another perspective on this topic.

I will be moderating a panel discussion at ITExpo West on Tuesday 5th October at 11:30 am in room 306B: “Achieving HD Voice On Smartphones.”

The communications market has been evolving to fixed high definition voice services for some time now, and nearly every desktop phone manufacturer is including support for G.722 and other codecs now. Why? Because HD voice makes the entire communications experience a much better one than we are used to.

But what does it mean for the wireless industry? When will wireless communications become part of the HD revolution? How will handset vendors, network equipment providers, and service providers have to adapt their current technologies in order to deliver wireless HD voice? How will HD impact service delivery? What are the business models around mobile HD voice?

This session will answer these questions and more, discussing both the technology and business aspects of bringing HD into the mobile space.

This is a deeply experienced panel; each of the panelists is a world-class expert in his field. We can expect a highly informative session, so come armed with your toughest questions.

I will be moderating a session at ITExpo West on Tuesday 5th October at 9:30 am: “Building Better HD Video Conferencing & Collaboration Systems,” will be held in room 306A.

Visual communications are becoming more and more commonplace. As networks improve to support video more effectively, the moment is right for broad market adoption of video conferencing and collaboration systems.

Delivering high quality video streams requires expertise in both networks and audio/video codec technology. Often, however, audio quality gets ignored, despite it being more important to efficient communication than the video component. Intelligibility is the key metric here, where wideband audio and voice quality enhancement algorithms can greatly improve the quality of experience.

This session will cover both audio and video aspects of today’s conferencing systems, and the various criteria that are used to evaluate them, including round-trip delay, lip-sync, smooth motion, bit-rate required, visual artifacts and network traversal – and of course pure audio quality. The emphasis will be on sharing best practices for building and deploying high-definition conferencing systems.

These panelists cover the complete technology stack from chips (Octasic), to equipment (Radvison) to network services (Masergy), so please bring your questions about any technical aspect of video conferencing systems.

I will be moderating a session at ITExpo West on Monday 4th October at 2:15 pm: “The State of VoIP Peering,” will be held in room 304C.

VoIP is a fact – it is here, and it is here to stay. That fact is undeniable. To date, the cost savings associated with VoIP have largely been enough to drive adoption. However, the true benefits of VoIP will only be realized through the continued growth of peering, which will keep calls on IP backbones rather than moving them onto the PSTN. Not only will increased peering continue to reduce costs, it will increase voice call quality – HD voice, for instance, can only be delivered on all-IP calls.

Of course, while there are benefits to peering, traditional carriers have traditionally not taken kindly to losing their PSTN traffic, for which they are able to bill by the minute. But, as the adoption of IP communications continues to increase – and of course the debate continues over when we will witness the true obsolescence of the PSTN – carriers will have little choice but to engage in peering relationships.

This session will offer an market update on the status of VoIP peering and its growth, as well as trends and technologies that will drive its growth going forward, including wideband audio and video calling.

This is shaping up to be a fascinating session. Rico can tell us about the hardware technologies that are enabling IP end-to-end for phone calls, and Mark and Grant will give us a real-world assessment of the state of deployment, the motivations of the early adopters, and the likely fate of the PSTN.