It points out that with “3% of smartphone users now consuming 40% of network capacity,” the carrier has to draw a line. Presumably because if 30% of AT&T’s subscribers were to buy iPhones, they would consume 400% of the network’s capacity.

Wireless networks are badly bandwidth constrained. AT&T’s woes with the iPhone launch were caused by lack of backhaul (wired capacity to the cell towers), but the real problem is on the wireless link from the cell tower to the phone.

The problem here is one of setting expectations. Here’s an excerpt from AT&T’s promotional materials: “Customers with capable LaptopConnect products or phones, like the iPhone 3G S, can experience the 7.2 [megabit per second] speeds in coverage areas.” A reasonable person reading this might think that it is an invitation to do something like video streaming. Actually, a single user of this bandwidth would consume the entire capacity of a cell-tower sector: 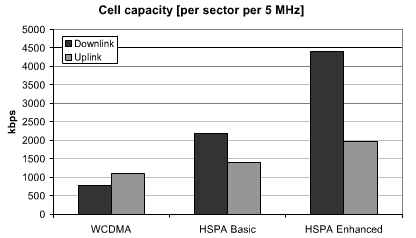 This provokes a dilemma – not just for AT&T but for all wireless service providers. Ideally you want the network to be super responsive, for example when you are loading a web page. This requires a lot of bandwidth for short bursts. So imposing a bandwidth cap, throttling download speeds to some arbitrary maximum, would give users a worse experience. But users who use a lot of bandwidth continuously – streaming live TV for example – make things bad for everybody.

The cellular companies think of users like this as bad guys, taking more than their share. But actually they are innocently taking the carriers up on the promises in their ads. This is why the Rethink piece says “many observers think AT&T – and its rivals – will have to return to usage-based pricing, or a tiered tariff plan.”

Actually, AT&T already appears to have such a policy – reserving the right to charge more if you use more than 5GB per month. This is a lot, unless you are using your phone to stream video. For example, it’s over 10,000 average web pages or 10,000 minutes of VoIP. You can avoid running over this cap by limiting your streaming videos and your videophone calls to when you are in Wi-Fi coverage. You can still watch videos when you are out and about by downloading them in advance, iPod style.

This doesn’t seem particularly burdensome to me.