We are half way through the year, so it’s time for another look at Wi-Fi phone certifications. Three things jump out this time. First, a leap in the number of Wi-Fi phone models in the second quarter of 2010. Second, the arrival of 802.11n in handsets, and third Samsung’s market-leading commitment to 802.11n. According to Rethink Wireless “Samsung’s share of the smartphone market was only about 5% in Q1 but it aims to increase this to almost 15% by year end.” Samsung Wi-Fi-certified a total of 73 dual mode phones in the first six months of 2010, three times as many as second place LG with 23. In the 11n category, Samsung’s lead was even more dominating: its 40 certifications were ten times either of the second place OEMs.

Here is a chart of dual mode phones certified with the Wi-Fi Alliance from 2008 to June 30th 2010. We usually do this chart stacked, but side-by-side gives a clearer comparison between feature phones and smart phones. Note that up to the middle of 2009, smart phones outpaced feature phones, but then it switched. This is a natural progression of Wi-Fi into the mass market, but may also be exaggerated by a quirk of reporting: of HTC’s 17 certifications in the first half of 2010, it only categorized one as a smart phone. 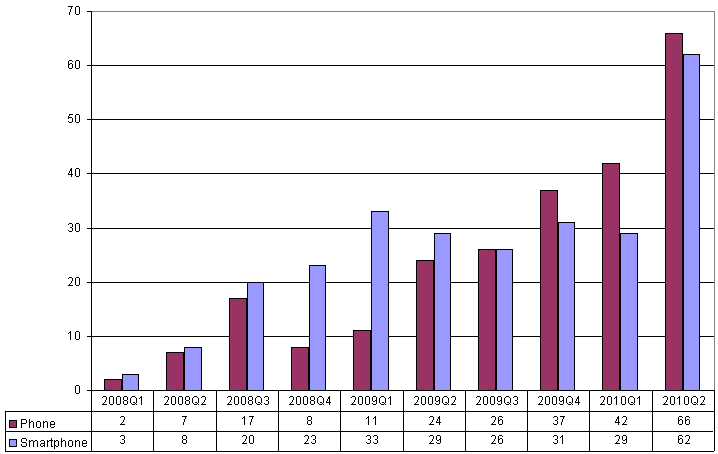 The chart below shows the growth of 802.11n. It starts in January 2010 because only one 11n phone was certified in 2009, at the end of December. As you can see, the growth is strong. I anticipate that practically all new dual mode phone certifications will be for 802.11n by the end of 2010. 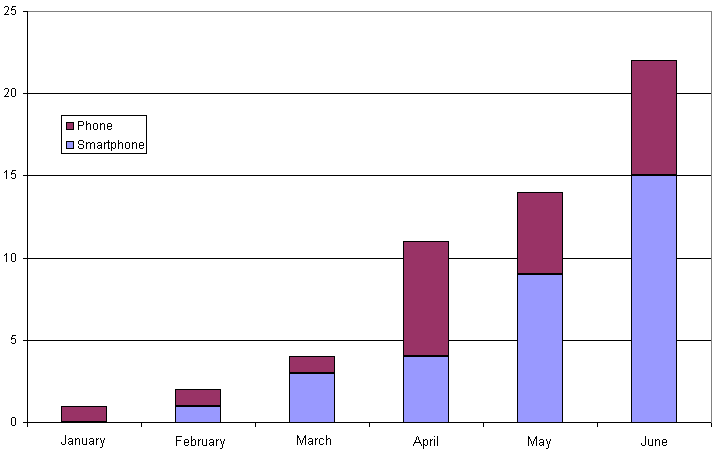 Below is the same chart sliced by manufacturer instead of by month. The iPhone is missing because it wasn’t certified until July, and the iPad is missing because it’s not a phone. With only one 802.11n phone, Nokia has become a technology laggard, at least in this respect. The RIM Pearl 8100/8105 certifications are the only ones with STBC, an important feature for phones because it improves rate at distance. All the major chips (except those from TI) support STBC, so the phone OEMs must be either leaving it disabled or just not bothering to certify for it. 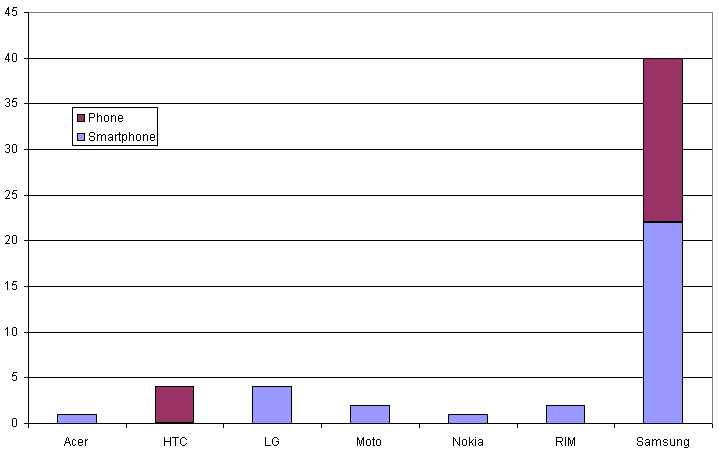